Just over 5 years ago, we launched Structure Sensor on Kickstarter. We poured everything we had into it without knowing if anyone would care. We were building a totally new kind of product and platform, long before “spatial computing” was an everyday term in the tech world.

This is why we were both thrilled and relieved when over 3500 supporters backed us on Kickstarter, helping us launch a groundbreaking 3D scanning platform on the iPad.

Since that launch, we’ve been steadily improving Structure SDK and we’ve seen a whole ecosystem grow around it. It’s been humbling to see the range of applications that have adopted Structure Sensor and SDK, everything from orthotics and prosthetics to VFX and indoor mapping. We even launched one of our own apps — Canvas.

There are now over 130 apps for Structure Sensor on the App Store!

But meanwhile, while this software ecosystem was unfolding, we were quietly hard at work on the next generation of our hardware. Development of Structure Sensor Mark II quietly began officially in 2014, just as the first Structure Sensors were shipping. We reconsidered every component, from the cameras, to the laser projector, to the very type of depth sensing. The result was a new sensing package with three cameras, a built-in IMU, and a new processing chip with more capability than before*.

Mark II represents an evolution of every single aspect of the original Structure Sensor. It has custom new optics that enable best-in-class sensing range and precision for body scanning, indoor scanning and more, built-in IMU and ultra-wide vision camera for better tracking, depth sensing that works outdoors in direct sunlight, and it comes in a package that’s 50% more compact than the original Structure Sensor.

Below are some neat comparisons between Mark II and the original Structure Sensor. You can pre-order Mark II today: https://structure.io/structure-sensor/mark-ii. We can’t wait to see what you do with it!

By completely redesigning the projector module we were able to reduce the volume by nearly 50% and the weight by 30%!

With higher resolution depth and a scanning mode for any case, see more details in your scans than ever before. 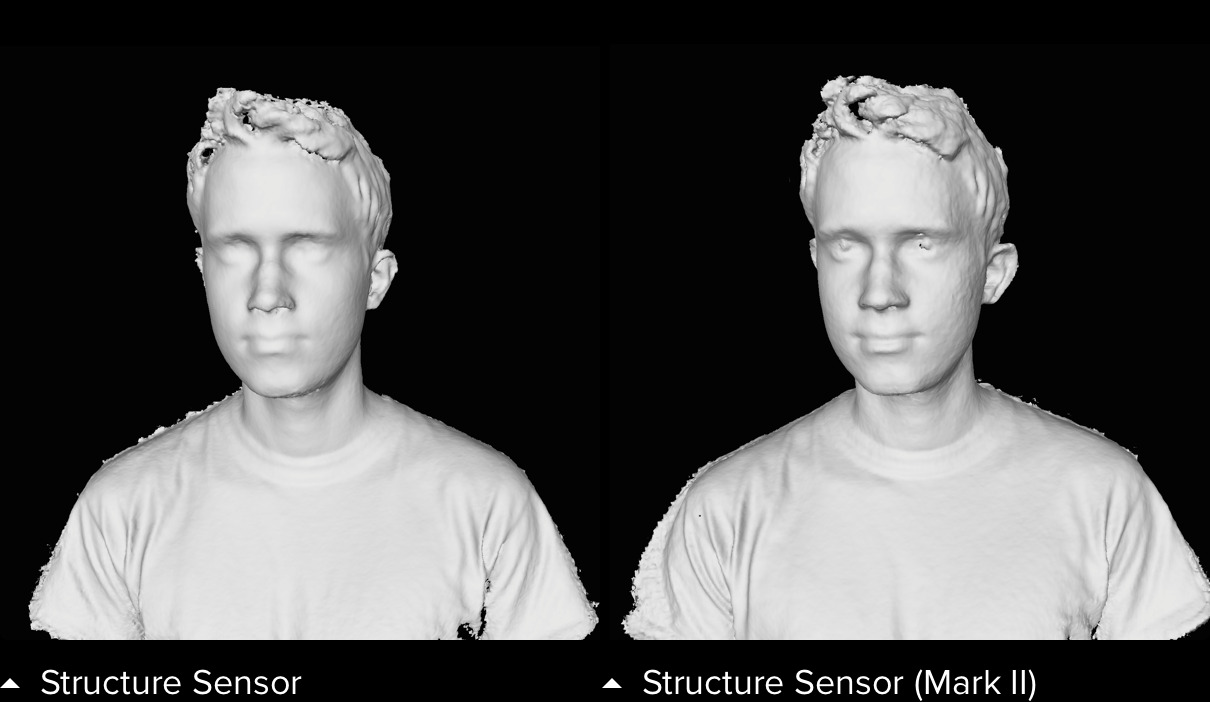 The ultra-wide camera allows tracking in the most extreme locations (including most blank-wall scenarios), without the need for an add-on lens.

With cameras that acquire a whole image all at once, Mark II can sense moving objects without rolling shutter effects.

* If these specs sound familiar, it might be because they’re what launched in Structure Core this past December! The sensor package inside Structure Core’s monochrome version was always intended to be used inside Mark II.